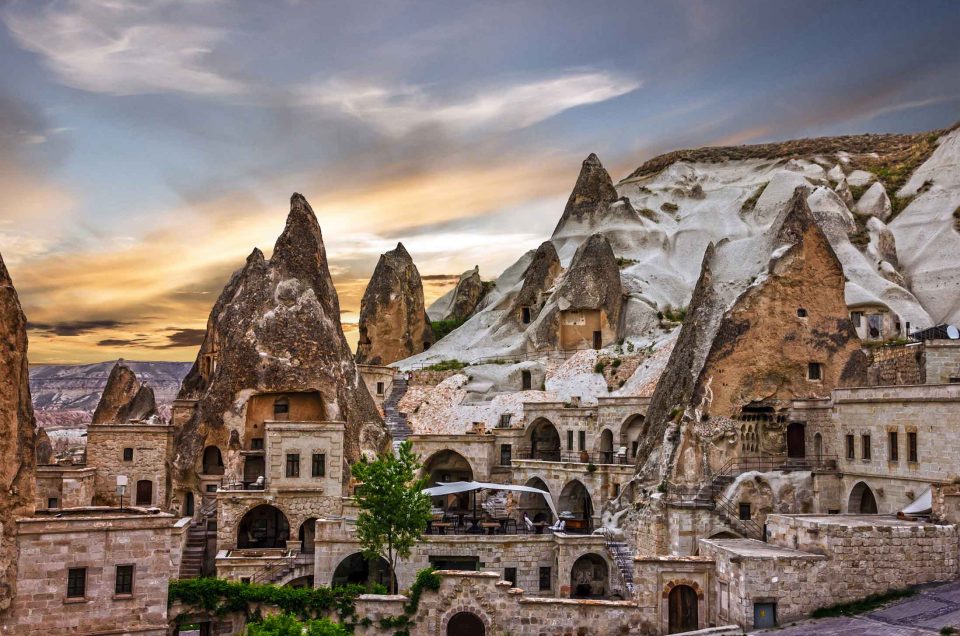 In 4th century, Cappadocia started to be known as the “Land of Three Saints” because of three remarkable theologians who are still collectively known as The Cappadocians; St. Basil the Great, his brother St. Gregory of Nyssa, and St. Gregory of Nazianzus who contributed a great deal to Christian doctrine in general and Eastern Orthodox belief in particular.

St. Basil was had a role in developing Christian monasticism of which these cave churches in his homeland are a product. The monastic complex in Goreme was carved out and decorated between 900 and 1200 AD. There are over 10 cave churches in Goreme Open Air Museum. Along with rectories, dwellings, and a religious school they form a large monastic complex carved out of a roughly ring-shaped rock formation in the fairy-tale landscape of Cappadocia. Entrance to the site is on the north side. The best way to explore the cave churches of Goreme is via the clearly marked path going counterclockwise. Each one has a modern Turkish name given by local villagers based on a prominent feature.

The majority of the churches are fully painted inside with beautiful and historically important Byzantine murals dating from 900 and 1200 AD. Most of them are in remarkably good condition, although nearly all the eyes of the painted figures have been gouged out by superstitious locals afraid of the Evil Eye. One notable exception is the Dark Church, the walls of which were long protected by pigeon droppings. One of the recurring themes in these and other Cappadocian churches is St. George slaying the dragon. According to local tradition the event occurred on the summit of Mount Erciyes.

Nunnery is a remarkable rock-carved convent with six floors of tunnels, corridors, stairways and chambers situated left of the entrance to the museum. It housed as many as 300 nuns at one time. The dining hall, kitchen and some rooms on the first floor, together with the ruined chapel on the second floor used to be open to public recently but now the complex can only be admired from the outside.

St. Basil’s Church has a rectangular nave shape with niches and three apses separated from a narthex by arches. The narthex has tombs in the floor which are open but covered with metal grating. The decoration is typical of the iconoclastic period, when images were outlawed – red ochre was painted on the stone without any images of people or animals. Subjects in this church include Christ, St. George, St. Basil and St. Theodore. The three Maltese crosses on the vault of the nave are believed to represent the Holy Trinity.

Apple Church is also one of the most prominent buildings in the area with its vivid colors. The church is a groin-vaulted structure with cross-in-square plan having four columns and a central dome. The frescoes of the Apple Church mostly date from the 11th century. In places they have fallen off and simple red-painted ornaments from the iconoclastic period can be seen. The frescoes are narrating scenes from the Bible and the life of Christ, hospitality of Abraham and three Hebrew youths. The building probably got its name from a red orb held by St. Michael the Archangel in a fresco near the entrance but an alternative theory is, it got its name from an apple orchard which used to be in front of the main entrance a long time ago.

St. Barbara Chapel is situated behind the rock housing Apple Church. This cruciform chapel with three apses is mostly decorated with simple figures and symbols in red paint on white plaster, making a sharp contrast with the colorful figures of most Goreme churches. They may have been painted shortly after the 8th century iconoclastic controversy. A giant locust symbolizing evil on one wall opposes two crosses on the other while a rooster representing the devil is battled with bricks representing the Church. Other strange creatures and shapes are more difficult to interpret. The figurative frescoes include Christ Pantocrator, St. George and the dragon, St Theodore, and St Barbara.

Snake Church has a long nave with a low, barrel-vaulted ceiling. Among the paintings are portraits of St. Theodore, St. George slaying the dragon again. It looks like a snake, which gave the chapel its name.  Emperor Constantine and his mother St. Helena, and St. Onuphrius. The last saint was an Egyptian hermit who lived near Thebes. In medieval art, including in this example, he is usually depicted with a long gray beard, wearing nothing but a fig leaf.

Dark Church called so because it gets very little light, was used as a pigeon house until the 1950’s. It took 14 years to scrape pigeon droppings off the walls, but underneath were beautifully preserved 11th century frescoes. Recently restored, the paintings of New Testament scenes and other subjects are considered the best-preserved frescoes in Cappadocia.

St. Catherine’s Chapel, built by a donor named Anna. The chapel of St. Catherine dates from the 11th century. It has a Greek-cross-shaped nave with a dome over the center and barrel-vaulted cross arms. The narthex has nine floor tombs and two burial niches. The frescoes depict: a Deesis (in the apse); Doctors of the Church: Gregory, Basil the Great and John Chrysostom; St. George, St. Theodore, and St. Catherine.

Sandals Church is named because of two footprints inside the entrance, the last imprints left by Jesus just before he ascended to heaven. A fresco of the Ascension can be seen directly above. The narthex of the church has collapsed; the nave has a cross plan with barrel vaults and well-preserved frescoes. The fresco subjects are New Testament scenes such as the Nativity, Adoration of the Magi, and the Baptism of Christ. The scenes of the way of the cross and the descent from the cross make this church different from the others. The main cupola has a Christ Pantocrator with the four Evangelists below; the other three cupolas show angels Michael, Gabriel and Uriel. In the apse is a Deesis (Christ with Mary and John the Baptist), with an inscription next to Christ reading “I am the light of the world, who follows me will not be left in the dark”. Around the altar are saints; Blaise, Gregory of Nazianzus, Basil, Chrysostom and Hypatius. The church dates back to the end of the 12th and the beginning of the 13th centuries.

Buckle Church is located on the other side of the road outside the museum and it is the largest cave church in Goreme. It can be entered with the same ticket as the main complex and should not be missed. The frescoes are also the finest in Goreme with the richest colors and the most detail. It dates from 10th and 11th centuries and was restored in the 1960’s.

The Buckle Church is comprised of four chambers, which are known as the Old Church, New Church, Paracclesion and Lower Church. The Old Church from 10th century has a single nave with a barrel vault. The frescoes give a comprehensive account of the life of Christ, from the Annunciation through the Baptism and Miracles and ending with the Passion, Resurrection and Ascension. The Transfiguration is painted over the entrance and the vault has portraits of saints. The Old Church now acts as a narthex for the New Church which was added to the former’s east side around 990 and 1010 AD. Its barrel-vaulted nave tells the story of Christ in deep red and blue hues. The transverse nave has frescoes of saints scenes from the life of St. Basil, and the miracles of Christ. 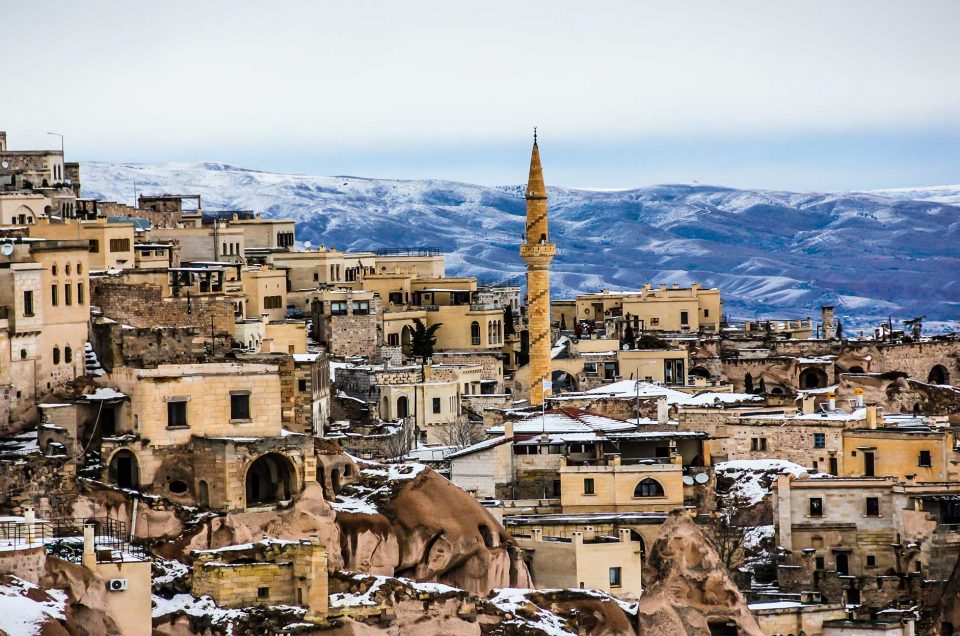 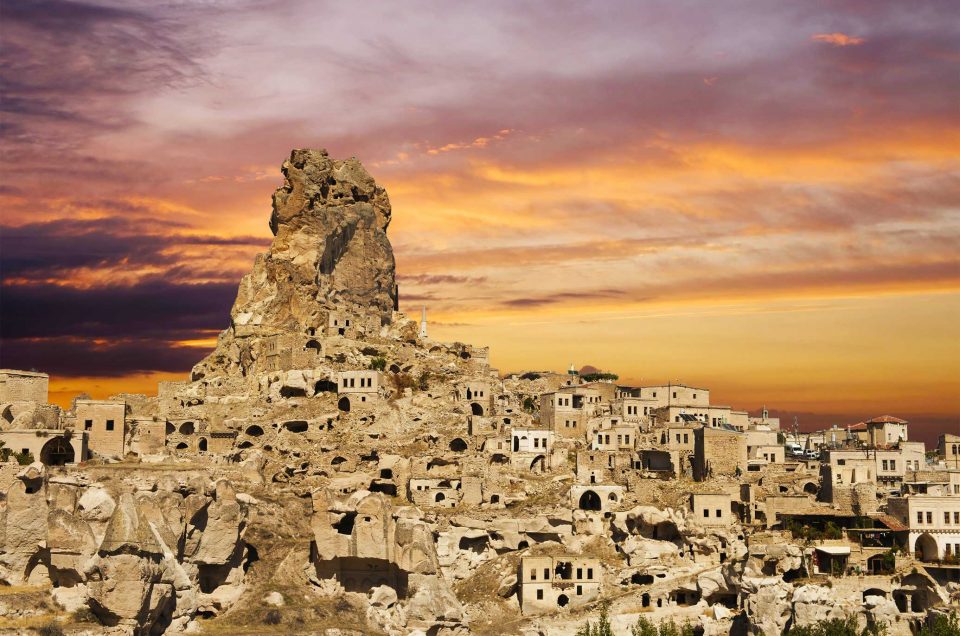