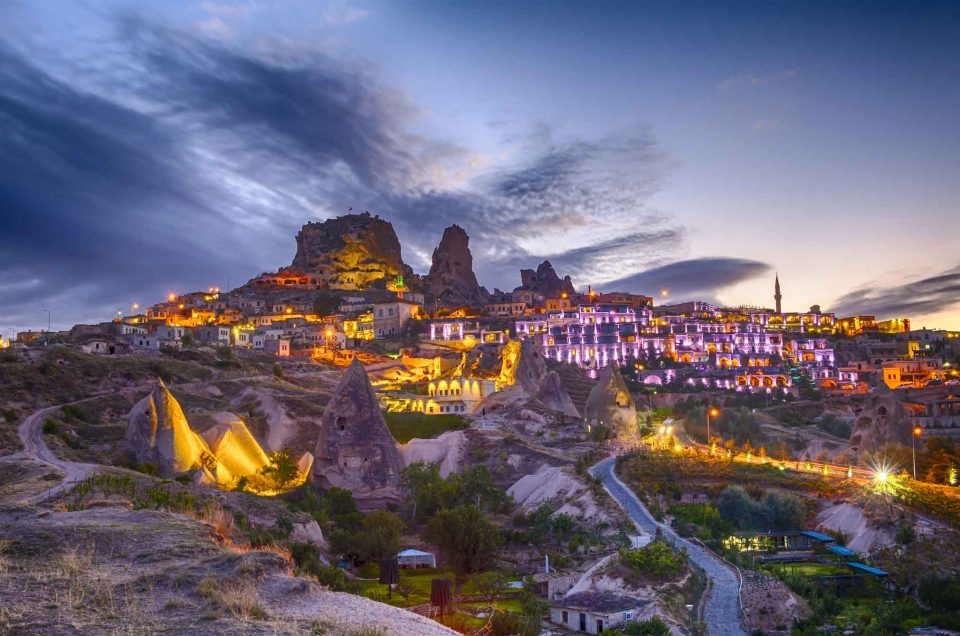 Cappadocia means the land of beautiful horses and has a unique historical and cultural background.  The Cappadocia region is generally regarded as the plains and mountain regions of eastern central Anatolia, around the reaches of the River Kizilirmak (Red River), to the Black Sea.  Several ancient roads ran through this area, allowing for cross cultural contact.  It is this contact that caused the creation of many underground cities to help people forced into religious exile.

Cappadocia is one of the most important tourist destinations of Turkey, visited every year by hundreds of thousands of travelers from all over the world. Cappadocia is a region of exceptional natural wonders, characterized by fairy chimneys and a unique historical and cultural heritage, which covers the provinces of Aksaray, Nevsehir, Nigde, Kayseri and Kirsehir in the Central Anatolian region.

The geological formation of Cappadocia is the result of two contradicting natural forces. One of them is the volcanic eruptions of the Erciyes, Hasandag and Gullu Dag mountains which led to the coverage of the area with lava, ashes, tuff and volcanic residue. The second force is the territorial erosion that started after the volcanic buildup was over. The causes of erosion which gave Cappadocia its present landscape have been the winds, rivers, and rains. Other factors of the scenic formation of Cappadocia are the climate of the region, with its sharp temperature changes, and the melting snow of the mountains. These sharp changes in temperature gave way to splits in the rocks which were filled up with rain water. As these crevasses froze in winter, the rocks cracked and separated.

The Nevsehir and Damsa streams which flow into the Kizilirmak river played a major role in the formation of the famous Cappadocian valleys. The rain water filled up the crevasses on the surface of the plateau and gave birth to the streams and rivers. The volcanic residues and the eroded earth got washed away by the rivers which sometimes cut the volcanic surface so sharply that separate hills were formed.

The first human settlements began in the prehistoric periods, when people build cities in the volcanic tuff rocks to protect themselves from the wild animals and enemies. There are many underground cities in Cappadocia, the biggest of which are Derinkuyu and Kaymakli.

People of the villages of Cappadocia used the soft volcanic rocks to carve houses, churches and monasteries into them. Goreme became a monastic center between 300—1200 AD. The first period of settlement in Goreme goes back to the Roman period. The Yusuf Koc, Ortahane, Durmus Kadir and Bezirhane churches in Goreme, houses and churches carved into rocks in Uzundere, Baglidere and Zemi valleys are all examples of history that we can see today. Goreme Open Air Museum is the most visited site of the monastic communities in Cappadocia and it is also one of the most famous sights in central Turkey. The whole complex contains more than 30 rock-carved churches and chapels, some of which have superb frescoes inside, dating from 9th to 11th centuries.